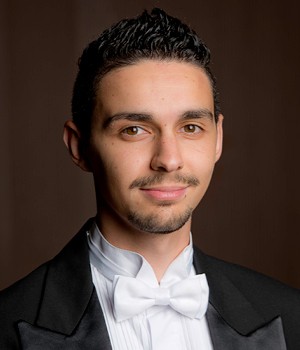 William Neres holds a degree in Music from the Federal University of São João del-Rei, having also studied for a term at the Federal University of Uberlândia, in the classes of professors Abel Moraes and Kayami Satomi, respectively. He specialized in Cello and Chamber Music at the École Normale de Musique in Paris, under the guidance of Roland Pidoux and Chantal De Buchy.

William has appeared at important music festivals, such as Campos do Jordão International, Música nas Montanhas and the International Festival de Musique Universitaire in France. On those occasions, he studied under the guidance of Márcio Carneiro, Helga Hinold, Jo Cole, Matias de Oliveira, Fábio Presgrave and Robert Suetholz, among others. He has also received awards in the contests Paulo Bosísio, Eleazar de Carvalho and Música XXI.

Alongside the guitar player Adriano D. Melo, he participated in the series Segunda Musical and Jovem Músico BDMG, both in Belo Horizonte, as well as the Guitar Week in Juiz de Fora. With the UDI Cello Ensemble, he’s toured in Brazil and France. He also performed with the symphonic orchestras of Poços de Caldas and Pouso Alegre, as well as with the Jazz Sinfônica of São José do Rio Pardo.