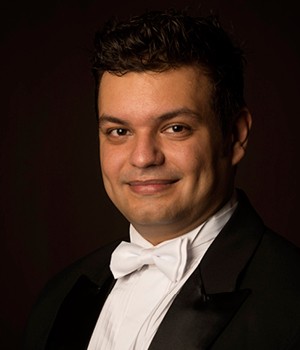 When I heard a double bass for the first time, I was immediately sure that I wanted to breathe music every day of my life. Since then, the instrument has been an essential part of my identity, of the person I have become.

Marcos Lemes graduated from The Buchmann-Mehta School of Music, at the Tel Aviv University, a study program created in a joint initiative with the Israel Philharmonic Orchestra (IPO). There, he studied under the guidance of Nir Comforty, to whom he is grateful for the generous five years of learning. During that period, Marcos developed his skills of orchestral practice at the IPO under the baton of Zubin Mehta, Kent Nagano, Christoph von Dohnányi, Peter Oundjian, and Lahav Shani. In 2015, he received the Certificate of Honor for Outstanding Achievement for his performance in the Buchmann-Mehta training program.

Performing several times as Principal Double bass for the Buchmann-Mehta Symphony, he took part on various tours and presented in music halls such as Carnegie Hall, in New York; Alte Oper, in Frankfurt; Rio de Janeiro Municipal Theater and São Paulo Hall, last both in Brazil. With them, Marcos has had the opportunity to work with great conductors such as Herbert Blomstedt, Yoav Talmi, Zeev Dorman, and Julian Rachlin.

Marcos Lemes was born in the city of Guaratinguetá, in 1985. He began his studies at the age of nineteen, with Umberto Bertrami, in the Projeto de Educação Musical do Santuário de Aparecida (an Educational Project). He went on to study with Sérgio de Oliveira at the Baccarelli Institute (São Paulo), and with Gael Lhoumeau in a special music project for schools, in the city of Barra Mansa (Rio de Janeiro). Marcos took part in masterclasses with Duncan McTier, Peter Mark, Teddy Kling, and Waldemar Schwiertz.