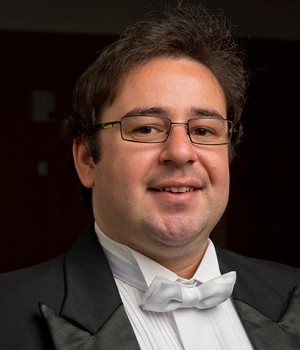 I remember my teacher Gilberto Siqueira telling me how he felt so thrilled about being for the first time at the new concert hall of the orchestra that he has been part of for more than forty years. For a while, I imagined this moment. Nowadays I have the privilege of being here, performing as a trumpetist of a great orchestra, at an amazing hall. A dream that came true.

Tássio was born in Rio Grande do Sul, where he began his trumpet studies with Jordelei dos Santos and Enio Guerra. In 2009, he won the Orquestra de Câmara Sesi-Fundarte of Porto Alegre Young Soloists contest. In the following year, he performed as soloist with the Orquestra do Teatro São Pedro de Porto Alegre, the Universidade de Santa Maria Symphony Orchestra and the Sesi-Fundarte Chamber Orchestra.

In 2011, Tássio moved to São Paulo, entering the Academia de Música da Orquestra Sinfônica do Estado de São Paulo (Osesp), where he studied with Flavio Gabriel and Gilberto Siqueira, Trumpet Solo at Osesp. As a member of the Youth Orchestra of the Americas, he appeared in the 2014 Caribbean tour, performing concerts in the Dominican Republic, Haiti and Jamaica, with YOA and with the Brass Quintet.

Tássio has participated in masterclasses with Reinhold Friedrich, Ole Edward Antonsen and Yigal Meltzer, having also played under the baton of conductors such as Frank Shipway, Kristjan Järvi and Marin Alsop. Before joining the Filarmônica de Minas Gerais, he served as Principal Trumpet of Orquestra Filarmônica de Goiás from 2013 to 2014.