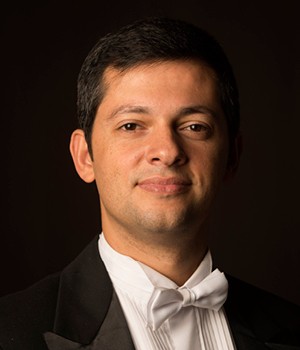 Making music is a great gift. As a double bass player, I have the privilege, at least while I’m performing a piece, of being part of its creation. I can make it come to life. Making music is also a way to serve others, and stir the most diverse feelings up in people. It is more than an art form, it's a miracle!

Rossini Parucci was born in the city of Londrina, Brazil, where he began his music studies under the guidance of Othonio Benvenuto, with whom he studied composition and conducting. Afterwards he studied vocal technique with Semiramis Lück. Rossini pursued his studies in double bass with Francisco das Chagas, Sergio de Oliveira, and Waldir Bertipaglia.

In 2006, after an invitation of Catalin Rotaru, he received a scholarship from the Arizona State University (ASU), in the United States. He graduated “with honor” in 2010. During his years in the US, Rossini was a soloist with the Sinfonietta and a finalist in the ASU School of Music Concerto Competition. He also served as Principal Double bass for the ASU Symphony Orchestra, the ASU Chamber Orchestra, and the Lyric Opera Theater (ASU).

As a conductor, he has led the Madrigal of Londrina, Viva Voz Choir, All Saints Chamber Choir and Londrina Soloists Chamber Orchestra. Throughout his career as a double bass player, he performed with several orchestras and chamber groups, in particular with the Brentano String Quartet. Between 2013 and 2015, he was a member of Goiaís Philharmonic Orchestra, in Brazil.